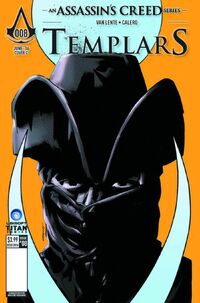 Assassin's Creed: Templar is a book created and developed from Abstergo Medical, which follows the story of Enok Jytte. The story was made before revived in 2006 by a researcher of Abstergo Medical, Betty Clark who was later introduced into the Templar Order. With memories of Betty, was developed by Andrew Gay in 2014 a novel and adapted it so that would befit the most of how the values of the Templars and their power. The story was released in 2015 and had a relatively good success especially among teenagers. Also in the story it already referred to Assassin's Creed: Changes, the producers thought they were doing a video game on the history of Enok Jytte but then vetoed this initiative and focused on the story of Marie Anne and Pierre Étienne d'Le Louroux.