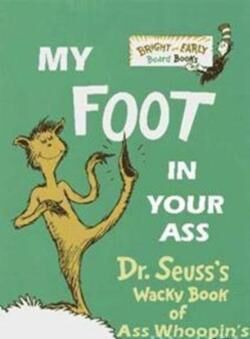 There once was big book of Rhymes. Which had nothing but weird little lines. Describing some killers who were possible thrillers. Created by people with time.

There once was a man named Al.

Who went to the temple with pals.

He gripped on his sword.

Thrown straight out the door.

And that's how Al lost a pal.

Jim and Bob of Moe[]

A dark night it was, down in dusty ol' Moe

Hookers and whores, and their dusty ol' bones.

The rain was storming, at a bar right by Tweed.

In comes an Assassin, with a mysterious deed.

He was looking for a man, named Jim and named Bob.

Jim was a builder, Bob had no job.

When the Assassin found Jim, he smiled with glee.

As he pulled out his bow, Jim took arrows to knees.

Bob was scared shitless, he ran and he fell.

He could kiss the man's ass, when they meet in swell hell.

How the Grinch stole the Creed[]

It was a cold Christmas night, in the space known as France.

Bitches were dancing, men not in their pants.

Assassins were hiding, in the small little shadows.

And one was to get, hung by the gallows.

Then came a man, his skin color green.

He's the perfect killer, too cold and too mean.

He eventually killed, the mentor out of spite.

He became Grand Master, in the ease of a night.

The Grinch killed everyone, from the very inside.

He was proud of himself, would never hide.

The Grinch would grin, as he remembered this day.

He will hide in the hay, the hay where he lay.

But the creed was revived, when a man completed his deed.

Cesare Borjare was thrown from a wall.

Cesare Borjare had a great fall.