The Assassins of the Spyland were assassins that were trained apart from the rest of the factions to maintain order within the modern world where soceity was on the brink of total collapse. These assassins were highly trained with the use of firearms other than their predecessors that were used in the past century of weaon usage. Lethal and deadly, the Spyland assassins were trained in combat in the front lines and were capable of eliminating a large group of enemines within seconds with a swing of their massive firearms.

Not much is known about the Spyland assassins, rather that they worked underground away from the populus, to create diversion tactics to rid the city of Templars that they lived in to create a more navigational path of combat. After receiving a great victory from the liberation of the Templars in the city of modern day New York, the team leader of the first squad of Spylanders devised a plan to infiltrate Absergo Industries, asssuming that the people there were just business workers and non-military individuals who had no knowledge of combat at all, and took a large squad of melee armed assassins to sneak into the building, unaware that Abstergo already captured their infiltration attempt on camera before they were even able to enter the builing. After tripping the detection beams at the entrance that were somehow invisible to their eyes, a large amount of Absergo agents with large ranged weapons ambushed them out of the cover of darkness and rained bullets on the entire team, resulting in great casulaties and leaving the team leader to escape with a few in one piece, barely alive. They sought refuge in an underground base, hoping that they would lead off the trail of the Templar agents of Absergo, but soon realized that their inflltration attempt not only alerted the organization members of Abstergo, but every single Templar throughout the world that were on the hunt for the Spylanders and were immediately onto them as soon as Abesergo informed them about the scene.

The Finding of Shaun

Hiding in a cave underground, they could hear the footsteps of the Templar agents converging onto their position, awating death as they got nearer, but they noticed that they weren't alone, as Shaun Hastings had been hiding in the underground cavern as well, hiding away from the Templars that were trying to capture him. Oldened with age, he still seemed to have the knowledge that he always had when suporting Desmond in his attempt to relieve the memories of his ancestors, and led them through a secreat passage that could be close off by a rock wall, sealing their entry off from the pursuing Templars, granting them safety throughout their efforts for survival. Shaun immediately noticed that the assassins were hurt and provided them with medical assistance to heal their wounds. After a few days the assassins were back on their feet, healthy as always, and received new upgrades from Shaun upon their awakening as they were presented with firearms of the modern world that were modified for each of the Assassin's liking. For the each Spylander assassin, they received a large heavily modified assault rifle that could tear through enemy armor with the fire of a few bullets, as as well as being able to fire a few grenades from the bottom barrel that could explode upon impact. In addition, they were presented with dual katanas with reinforced steel that could be wielded with ease and could slice through hardened material with a force strong enough to make is possible. After receiving the weapons, they thanked Shaun and proceeded back to where they came from, but stopped short when they were concerned about the safety of Shaun since he was old and was in need of assistance. He insisted for them to leave, but the asssassins stayed where they were and supported Shaun to his feet after seeing him stumble after a few steps. Shaun then said he was able to hold his own, since he's been able to do so his entire life without the assistance of others during his studies, and assured them they would meet again. The assassins bid Shaun farewell, and promised that they would return the favor if they were to meet again some day. They continuted through the exit of the cave, only to find that the Absergo agents ended their search for them and that the pursuit returned to a netural state. They would plan their revenge, but they would need to create a well formulated plan to as where the Templars won't know what's coming.

Before they began their strike on Abstergo, they began to call in recruits from all over the world who were in hiding from the Templars, and they rallied together at one classified location that they begain to work on their plan and called themselves, "The Spylander Assassins". After gearing up for the assault on Absergo, they proceeded to the building of where the Templars were holded up, and saw that there were already agents waiting at the front doors of the industry bulding, waiting with firearms in their hand for the assassins to get within range of them. The team leader of the Spylanders halted the team's march and held up a hand in the air, which puzzled the Templars waiting at the front door and were unexpecteldly air assassinated from the air by assassins who were waiting for the order of the kill above them. They proceeded into the building where two Absergo agents halted them, but were immediately gunned down by the marching Assassins and continuted to move on through the building ruthlessly slaughtering every single Abstergo agent that made an approach to attack the team. They reached the control room of Absergo, where they sabotaged the evidence of their infiltration into the industry and killed the agents monitoring the security cameras. While deleting the evidence from the control room, a downed guard seemed to still be alive while writhing on the ground, and made an attempt to fire his pistol at the team leader, in which one of the assassins jumped in his way and took the bullets to his chest, which resulted in a major injury. The team leader kneeled over the assassin who was shot and told him that things were going to be alright and that they were going to get Shaun to help as soon as possible, but the Assassin was dead. Angry, the team leader stormed over to the agent who shot him and drove his katana into his chest, killing him instantly, and sending the rest of the Absergo agents fleeing in terror. Every Abstergo agent was on the order of retreat and were told to exit the building right away to transition their operations into another building. One of the assassins asked if that they should chase after them, but the team leader suggested that they'd let them run, knowing that they'd return one day and will be ready for them as soon as they made their next move against the assassins. It turned out that the the number of the Templars were broken, and they were driven far away from the home of the Assassins, never to return again that left the side of dominance in peace and harmony. 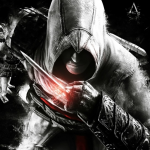