"Unlike you, I help people … by killing you."
―Black Cross

The Black Cross (harvested from: Dorothy Judge, a Master Templar during the Purge) was an OTPA (Omega Training Program Avatar) used by Abstergo Medical in their research for Pieces of Eden, and to train recruits of the Templar Order, during their Project Omega and it's training program. The Black Cross' special weapon was her dagger.

The Black Cross (aka Dorothy Judge) was a woman that operated in Caribbean on the behalf of the Radical branch of the new West Indies Rite of the Templar Order. As a Black Cross, it was up to Dorothy to make sure the Templars stayed on the right course – not acting like the Roman Rite had done. At the end of a failed Templar-conspiracy, an assassination attempt on the Cross made her loose her right arm.

Moves unique to the Black Cross

Behind her target, the Black Cross brutally kicks her victim in the back of the knee, painfully forcing them to kneel. Holding their chin upwards, the Cross then exposes their neck, before taking out her dagger and slicing their throat. From there, her victim falls forward to the ground, dying of blood loss from their wound.

Moves executed by the Smuggler when using another weapon than her personal. These moves are 'common' because they are executed by all the avatars.

Stealthily approaching her target from the front, the Black Cross savagely kicks their left leg. As they clutch their injured limb, she reaches for her bladed fan, still folded, and then slashes her victim across the side of the abdomen with the fan's spine. The Black Cross then swiftly follows up this attack by impaling her target's spine with her weapon, before storing it as they collapse, paralyzed and bleeding out.

Quietly sneaking up to her unsuspecting target, the Black Cross suddenly and viciously stabs them in the back with her folded fan's spine. Before her victim can react in any way, she spins and slashes the newly inflicted wound, severing their spine at the same time. She then puts away her fan, satisfied that her target is dead.

Dashing towards her target from the front, the Black Cross leaps upward, spinning in the air like a pirouette, while taking out her bladed fan and slashing their throat. She then lands daintily on her feet and restores her fan to its holder, while her victim's dead body lies on the floor.

Sprinting up to her target from behind, the Black Cross rolls over their back with her legs extended in the air, before landing on her knees in front of them. Then, while her victim is still dazed, she whips out her bladed fan and severs their neck to the bone, before calmly returning her fan to its holster and walking away.

The Black Cross walks up to her victim and slashes them across the back twice. The Black Cross then drives her sword into the victim's spine, killing them.

Sprinting over to her target, the Black Cross, having drawn her saber, swiftly slices the victim across the stomach, causing him/her to bend over in pain. Leaving her victim no time to recover, the Black Cross follows by slashing her sword upward diagonally, cleaving its way through the victim's neck and spinning it through the air, before he/she hit the ground, dead.

Approaching her target, the Black Cross grabs her hook, before swinging it in a downwards arc and piercing it into their left shoulder. As the weapon lodges itself into her victim, she kicks their left knee from underneath them, sending them spinning onto their back and her hook ripping a savage wound as it frees itself with the momentum.

Casually walking over to her target from behind, the Black Cross draws her hook, before reaching around and stabbing it into her victim's neck. As they stand vulnerable from the blow, she closes the distance and grasps their shoulder, before the Black Cross twists her victim and wrenches her weapon sharply to the right, slitting their throat and spinning them, where they stumble and fall to their death.

Rushing over to her target, the Black Cross swings her hook in an upwards arc and embeds its tip into their abdomen. Following this, she cruelly wrenches her weapon vertically, shredding her victim's internal organs, before latching his hook under their chin and viciously ripping it out, lurching them forward to die.

Sprinting up behind her target, the Black Cross stabs her hook into the side of the victim's mouth, before swinging them around and slamming their body to the ground. After this, she brutally tears her weapon out of her victim's face, creating a large gash and twisting their head upwards, where they are left to bleed out from their sizable wound.

In addition to several daggers, the Black Cross also had a several number of other weapons. On a given level of prestige, more decorated weapons are to be unlocked. The hidden weapons was either the hidden blade or a spike. 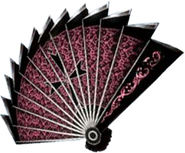 Retrieved from "https://acwfanon.fandom.com/wiki/Black_Cross_(OTPA)?oldid=8773"
Community content is available under CC-BY-SA unless otherwise noted.