"Damnati militum! it's now clear to me that i have to do everything by myself! And consider me kind enough for not Decimating you!"
―Tullius,angry at his soldiers for disrespecting an order

Caius Tullis was a centurion of the roman army, until this title was taken from him. Shortly after he joined the Roman Brotherhood, alson known as the Liberalis Circulus. This is where he gets his cognomen "Milvius" which roughly translates into "hawk/sparrow"

His DNA was found and his memory relived by Abstergo employee, and Assassin sleeper agent Vincenzo Guida (WIP)

He's the past protagonist of AC:Imperium

Caius Tullius was Born in Mediolanum (modern day Milan) from a Patrician Father and and a Wealthy Plebian, and maybe most importantly from a combined unhappy marriage. He spent most of his childhood in his birthplace

After going trough tha usual roman education system in his native city he quickly gained an interest for the military department, which was only amplified by seeing a powerful general like Augustus sitting on the imperial throne.

At 16 he volountarly enrolled into the imperial legions

Fighting loyally for his emperor, he quickly climbed the ranks up to centurion.

This until the Campaign defending the Rhine: in particular he and his Centuria were tasked with occupying a small camp where a relatively Important commander lived: Comhnall(WIP). But they had underestimated the enemy forces. Realizing tradition tactics were useless, he proposed many unconventional ones, but was only met with talk of "honor" and "dignity".

So, he went into the camp alone,with only his sword and some leather armor(opposed to his usual Iron one) and snuck into the Central tent. And with one quick stab got rid of his enemy who in dying, had dropped an amulet with a snake engraved on it. Planning on using it as proof of his success, he took the pendant.

Once the armies had returned to Italy, he showed the necklace to his general,Tiberius, probably hoping to ease his way upwards in the military ladder. He agreed to take this to the emperor. What neither of them knew at the time, is that this would be very counterproductive: seeing the bloodied amulet, Augustus got enraged and kicked Tullius out of the army. Nontheless, the story of the stealthy Centurion spread fastly among the population

After losing his title, he moved towards south Italy, and specifically to Neapolis (modern day Naples) where he met Latin poet and Hidden Ones informer Publius Vergilius Maro. Having heard his story he introduced him to the Brotherhood. But the members mistrusted him for having served under the authorities and thought of him as a spy. But since they were short of members, as the Hidden ones were hunted down after Caesar's death, they accepted him as a member under the Mentor Julius Nevio Umbra(WIP)

He had already most of the training necessary, but he still had to pass trough one year of both studies on Hidden ones lore and the final pieces of his physical training. This is where he learns the truth about the necklace,and he starts doubting the man he once saw as an idol. Nevertheless, his loyalty to the empire is as strong as ever, casting off his doubts as impossible Then, he started getting his first targets

His first target was more of a test than anything: a rich merchant in the area,Theopropides Cethegus (WIP), an important source of income for the Order of the Ancients. While not the smoothest operation, the assassination was a success.

Finally seeing the worth in Tullius they gifted him his Hidden Blade. During this period he also adopted his pet eagle, Olympio.

In the 4 years after he went out of his way to clear Italy of almost all traces of the order. However, only 5 were relevant enough,as they brought Milvius closer to the truth he refuses to accept:

His first real target was a priest,Lyco Cresces(WIP). He ambushed him at the Temple of Athena in Paestum, in his dying words, Lyco told Milvius that he was appointed there by the Pontifex Maximus himself, giving more reasons for the Hidden One to doubt the Emperor

Following that, he went after the roman female poet Sulpicia, another member of the Order. it was no easy task, most notably, because he had to go back to Rome,where he was a known man,and viewed as a criminal. With the woman being seemingly disconnected from Augustus, Mlvius took a breath of relief. What he learned from the poet was that the order was after an Isu Artifact, the Mask of Eden (WIP)

Next, he tracks down Philocrates Allectus, a rebellious Plebian, and alleged member of the Order. While it wasn't easy either,Milvius Aprreciated this mission as it took him back To his native city of Mediolanum. However, this was another rough hit to Milvius' conviction. While Phliocrates wasn't a member himself, he was paid by the order to rebel, in order for the Emperor to stop him and make himself look better

But confirmation came from his fourth major target Pretorian Guard Gorgines Glaucia(WIP) which fully confirmed that Augustus inherited the tite of Grand Master for his adoptive father Caesar.

Right After Glaucia's death, Mivius was granted the rank of Master, even if not every member agreed. But Milvius had fallen into a period of crisis, as he was now supposed to kill the man he once considered a hero, and knows many more people still do, and stays away from the Brotherhood for a few months.Incredibly weakend by this choice, the brotherhood is in great danger which excalates into the public execution of Mentor Julius Nevio,an event hosted by the emperor himself. Milvius sees the event, and tries to stop it, But with no result. Realizing he cares about the brotherhood and its ideals above all else, he returns from his hiatus and takes Augustus as his next and final target. But before any of that he had to grab the Mask before the Order did.

The Brotherhood knew close to nothing about the artifact. only record of it was a document in an abandoned base in the nearby city of Pompeii. So, with little hope, Milvius went exactly in that direction. The document Wasn't there. but as soon as the Master reached the hidden base, he felt a strong headache, and his eagle vision activated on it's own, guiding him to the ruins of an Isu temple, where supposedly the item was stored. But alas, Ruins being ruins, the place collapsed, making the path much more difficult for Milvuis. But in the end, the idetm was secured, and he could move on to his final target.

"Have I played the part well? Then applaud as I exit. And goodbye, my dear Livia: never forget our lovely marriage!"
―Augustus last words

Milvius saw what the Order did to Nevio as "Augustus destroying his family", and decided to take revenge for that. On the 19th of August of 14 AD, he finally took action. But he took no direct approach. Instead, he decided to poison a cup of wine destined to the Emperor, framing his wife for the murder. Milvus knew this wouldn't be enough to stop the order,and that the next emperor, Tiberius, would probably take the mantle of grand master himself. Nontheless, the plan went smoothly, and the first emperor was dead.

At his return from the mission he was offered the title of Mentor. Under his Mentorship the hidden one Leonius assassinated Caligula,just a few years before the death of the Mentor.

He had kept the mask on himself at all times, litterally bringing it with him in his tomb

Tullius died In 43 AD in his home in Neapolis. It's uncertain whether it was Illness caused from age, or poison from a member of the Order. Dying heirless and unexpectedly, it left the brotherhood struggling to find a new Mentor. The Issue was only solved the year after, With Leonius taking to the role

The former Mentor was buried In Neapolis, near the location where two decades earlier, his dear friend Virgil was buried, the new tomb hidden carefuly from malicious eyes, with the mask still in Milvius' hands

Having spent the first part of his life in the military, he his an excellent fighter, with his favourite weapons being: a gladius (shortsword) a pilum (spear) Both oval (parmula) and rectangular (scutus) shields, and usually, a bow.

In addition, once he joined the brotherhood he was gifter both a dagger, then once he had proven himself as a usefull member, a hidden blade.

The roman hidden blade of the Augustan period was a more refined version of the Egyptian Model used by Bayek and Aya: while the mechanism was pretty much the same, but the width of the blade was reduced to allow for a longer and sharper point, making it easier to slash, with little to no effect on its stabbing capabilities.

Also thanks to his past as a centurion, he had the skills necessary to recruit new members for the hidden ones, slowly rebuilding what was left of the Brotherhood

While it is unsure whether his companions knew, since there are no written records of this, reliving his memories has proved that Milvius did, in fact, have access to eagle vision,but a weaker version of it, as the family tree going back to Adam and Eve is a secondary branch,making it more similar to Eivor's Impulse than it is to Ezio's prolonged state. His perception skills, however, were greatly augmented by Olympio.

While he had the Mask with him most of the time, it is very likely he never weared it, making the Order's tales and legends the only hypothesis on the powers of the artifact.

While his free running skills are worth mentioning, they aren't his strongest point. 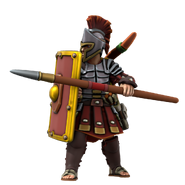 Tullius in his Centurion armor 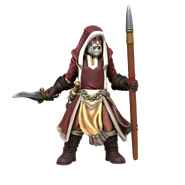 Tullius in his Mentor Robes 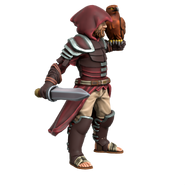 Milvius as a Master Hidden One 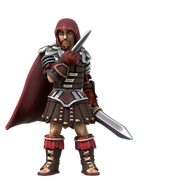 Milvius with his Hidden Blade Drawn 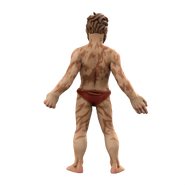