Constant Lavoie is an ancestor of Ali Thespian.

Born and raised by wealthy merchants, Constant Lavoie was destined to become the heir of the family's company. His sisters had no chance to do so – they were destined to marry themselves to bankers or other merchants. Instead of following his father's wishes however, Constant chose to join the clergy.

Serving as a loyal servant of God, Constant lived a quiet – thus, boring – life. All of the days went to preying, avoiding crisis, painting the reality promising. At the age of 24, Constant left the monastery for creating his own cult.

Working as a cultist, Constant recruited lost souls – men and women who never had a life, or would never get one. His services as a monk had served him well in the art of articulation, making his followers and acolytes worshiped him as their own interpretation of God. The most loyal cultists, Clémentine and Gauthier Moreau, became the overseers. Blinded by their believes, Constant and the siblings ordered the cultist to execute lawbreakings – such as intrusions, blackmail and murder. Although despite alle these evil deeds, Constant only forced the cultists to do so on the men and women who stood in the way of a perfect world.

Constant's actions through his cult did not went unnoticed by the Templar and Assassin Order: the former wanted to see the man within their ranks, the latter wanted him inside a coffin. Templar agents were sent to locate him and his cult.

Templar agent Philippe-Hugues Bertas were sent to the city of Marseille – other had been sent to cities as Toulon, Fos-sur-Mer and Montpellier. Bertas had sent some under-ranked Templar agents to collect research, so when he arrived they would have the most of information he needed. Constant soon found out that Constant's cult had their headquarters at the island of Corsica – making it more difficult to trace them – though their base of operations was to be located in Marseille. One of the cult's faces, Clémentine, was to be located at one of six taverns in the city.

Contacting Clémentine, Bertas soon managed to find out more about the cult. After living three days in the city of Marseille, Bertas and Clémentine agreed on taking a ship to Ajaccio, Corsica. She would present him for Constant: if the cult-leader accepted Bertas' wish of entering the Order, he would be free to stay as long as he pleased; if Constant did not do so, he would bring Bertas to the catacombs – where he would kill him, leaving his body to rot.

At the date of 3rd April 1724, Constant Lavoie were recruited into the fold of the Templar Order.

Constant was pointed out to be Templar leader in 1741, but during his 17 years of service he accomplished great things for the Parisian Rite of the Templar Order. The most notable was two of his missions: one in Tunis, Tunisia, and the second in Kyrenia, Cyprus.

Pieces of Eden: Eye of Eden and Sword of Eden

Templar library. Book about Isu, written by Basilisk. Learning about the Crown.

Cult of Ridefort
Add a photo to this gallery

People falling to the blade of Constant 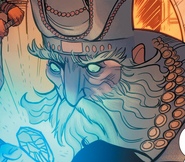 Maria Nomiki
(May 1736)
Add a photo to this gallery

Ali Thespian
(descendant)
Add a photo to this gallery

Retrieved from "https://acwfanon.fandom.com/wiki/Constant_Lavoie?oldid=12715"
Community content is available under CC-BY-SA unless otherwise noted.