Derek Waller ( 24 October 1754 - 17 April 1824) a.k.a Kappiataitok, was a Canadian Assassin living in colonial America during the latter half of the 18th century. He took part in the American Revolutionary War. He was an ancestor of the modern day American Assassin, Colin "Frietz" Morgan.

Born to English parents, Derek was born in a small Inuit village. Before that, his father, Alexander, was accused for murdering an English politician who was working for the Templars. In that night, Alexander was caught by a spy hired by the Templars dumping the body in the Effra river. So he could escape the death sentence, Alexander fled away with his wife and unborn baby heading to the west in Alaska. At the age of 10, Derek was taught by his father the arts of freeruning, combat with a variety of weapons and survival. When Derek was 15 years old, he already mastered all the essential tehniques he was taught. One day he was at a hunting session, when he suddenly heard screams coming from his village. Arrived, he stood in shock watching how people were executed and tortured. Unconciously, the invaders were in fact Templars from England searching his father for his crime. Left orphaned and with no home, Derek decided that he should pack and leave the slaughtered place with only one objective in his mind, kill the ones responsible for the deaths of many.

As he started his travel, Derek decide he should go to the south, looking for a city with civilization. But he remembered that near the border of Canada (New France called then), there was a close friend of his father, working for the church, father Hildegard. He was so happy to see the boy alive, since he wanted to alert his father to move out of the village, but it was to late. The priest happily invited the boy to live in the church.

3 years passed since that horrific day, normally it should have been erased from his mind, but Derek couldn't forgot it. But once a year, Derek celebrates his birthday with his adoptive father. When Derek turned 18, father Hildegard decided to show the boy who is now a grown man a secret kept by his father for many years before he was born. Hildegard opened a small secret sancutary beneath the church. In the sanctuary there was a stone statue adorning a white robe with a hood. Under the statue, there was a wooden box holding a hidden blade made by Alexander. Derek was confused, but the priest told him that his father was a "soldier entrusted to bring peace upon chaos ", he was an Assassin. He also told Derek that the Assassins were engaged in an endless war with a worldwide organization called the Templar Order. Hearing the story, Derek wanted to walk on his father's footsteps, saying that he is an adult now. Hidlegard agreed, but with the condition for a more elaborated training. Derek accepted...

The assassin training consisted of learning more complex ways of killing the target in sword fight (disarming, counter, stun, etc.), blending with the crowds of people and the used hidden blade training (stealth assassination, direct combat), which Derek mastered them all. Father Hildegard was proud of his progress, but the young man needed to complete the last trial, assassinating his first target.

The only information he knew was that he brings valuable information to the Templars who are residing there. Derek wasn't able to find him by himself, but he found a suspicious man coming from a tailor shop carrying a package. Derek followed him to an abandoned warehouse, which looked suspicious. Inside, his target was waiting for the courier. To slow down the courier, Derek hired a group of prostitutes to distract him, a clever move. For not being detected, the young man decided to climb the warehouse. Doing that, he air assassinated his target. His last words were that his "friends" found out that Hildegard's church was a hideout for the Assassins.

Derek hearing this, he rushed to the church hoping to find his adoptive father alive. But his hopes shattered down like the church. The Templars located it a started a fire and burned down the building, thus killing Hildegard. The ones who burned the church spotted Derek and tried to kill him, but the young man bested all of them. His anger increased to limits, vengenace being the only thing in his mind. Before he could leave, he took the white robe of his father and arsenal to begin his quest for revenge.

Derek's personality varies from calm and free from bounds to incredibly angry and blind by rage, unconcious of his actions. His anger led him to be rude and unsocial to the surroundings, but alone, he finds inner peace in his soul but not enough to be reconciled with the death of those dear to him. In his younger years, he developed an early stage of sociophobia, afraid to talk to the people around. But as the years passed, Derek became to adapt to the society, due to his popularity in at least 2 cities. 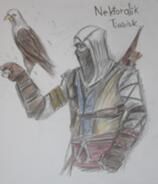