Fernando I Of Napoli

Fernando I Of Napoli

Fernando I Of Napoli or Fernando Di Bronte I (1641-1702) Was a Neapolitan King and landlord in the Templar Order in the 17th century and the first two years of the 18th century. He was the first founder of the Sicari Di Bronte Di Templari and the Sicarus Fleet. He also fought in at least four conflicts: the Catalan Revolt, Spanish side; the Portuguese Restoration War, Spanish side; the War of Devolution, Spanish side; Most Jacobite Uprisings from 1688 to 1700, Scottish Jacobite side- slightly angering to his noble family supporting Spain in them, and the general public. He was the father and predecessor of Fernando II "Il Pomposo" Di Napoli.

Born to the Neapolitan Nobility, Fernando became heir to the throne at an early age, 15, and so was inducted into the Sicarus Templariorum by his family, where he served under his father, Ronaldino III.

Being born into the local nobility, Fernando's upbringing made him seem superior to much of his peers in school. He was also apparently extremely intellectual although very selfish due to him thinking himself superior because of belonging to the nearby Royalty. at some point in 1656, at the age of 15, Fernando was declared heir to his father in the Neapolitan Parliament, becoming second-to-highest of Napoli and all overseas territories belonging to modern day Italy. Throughout the next 45 years, he was known to have killed at least 600 men, singlehandedly at least.

Wrath and Rise to Power[]

Throughout 1665 to 1673, Fernando had a highly successful career especially during the early years and formation of the Sicari Di Bronte Di Templari and Sicarus Fleet. He formed these due to specifically increasing amount of Piracy in the Mediterranean Sea and, also because he simply had a high number of enemies, in Italy and in many other places. He would set off on his first anti-pirate voyage. Despite owning only ten naval vessels against fifty-one pirate ships, Fernando and his currently small Navy defeated the pirates and therefore completed their first mission. this would earn him a large count of fame, popularity, Spanish allies and a decently-sized Fleet. In July, 1666, Bronte embarked on a journey, with intention to unite himself with the Royal Navy and Candian Navy. After successfully gaining unity with Britain and Greece, he returned home in the November of the same year. When entering his house on the night of his arrival, he was shot and temporarily wounded by an assassin of the West Indies Brotherhood, with a Phantom Blade. on Christmas Eve, 1666, he was crowned King of Napoli and Emperor of the Sicarus Fleet.

From 1666 to 1670, Bronte fought in numerous wars alongside the Sicari Di Bronte Di Templari. One of these was the Portuguese-Napolitano War, lasting from 1666-1669. Him and his army killed approximately 50,500 men (soldiers and spies) and he killed 387 men singlehandedly. He mainly wore a certain suit of armour in conflict which was forged in 1266 for Charles I of Anjou of the Regnum Neapolitanum (Kingdom of Naples); Fernando is a distant descendant of Charles, therefore obtaining the armour. He and his army fought ruthlessly for three years and ten months, eventually defeating the Portuguese defence in December 1669 by killing King Alfonso VI of Portugal in a jousting contest because they would be otherwise equal. He was nearly assassinated twice by legendary assassins O Senhor (the lord) and Thomas Stoddard.

In 1670, after five years of constant war, Bronte declared himself King of both Napoli and Sicily, a united state which would not exist until 1816. Four years later, he decided to demolish his ship the Mare Arce to prevent it from falling apart. Before demolishing it, he accompanied his father, Ronaldino, to retrieve an Apple of Eden from a nearby sanctuary, which they did not find, because of it not existing. Instead of the Apple, they found a body in its place and so the pair then buried it in the local Catacombs, strangely beneath the palace. Later that day, he was convinced by his father that if he was to not destruct the Mare Arce and that it would not fall apart. It would later become the Flagship of the Sicarus Fleet.

On December 24th, 1677, Fernando became the father of his first son, Fernando. Much to his later brother's anger, Fernando became the next king after his father. Although his brother was heir to Fernando's throne, he died before Fernando. The brothers would later spend a large amount of time hunting animals with their father and their friends and, sometimes their grandfather, Phillip VI of Spain. Fernando (the elder) also fathered at least three daughters, two dying before their first birthdays. Sadly, Fernando would not see his sons' great efforts against pirates, yet their lives were more than impressive.

On July 9th, 1702, Di Bronte was said to have sailed to a secret outpost on Gibraltar, leaving maps of a route he took to arrive in the hands of the leader there. These maps were recovered by an unknown assassin and assisted the tracking down of Fernando and acquiring charts of a precursor site. Knowing that someone would chase his quest route, he volunteered to stay behind with the Mare Arce and a fleet of ships to stop any enemies.

After the Spanish individual sank his fleet, the Mare Arce ambushed it with cannons. Despite it's superior size and firepower, it was disabled by the ship, later known as Pedro of the Caribbean. Fernando's ship was soon near to incapacitated. He escaped to the outpost being closely pursued by the Pedro of the Caribbean, and when he went ashore, he was shot and fell on the outpost tower steps. As he died, Fernando angrily taunted the captain, telling them that they would be remembered for being a traitor while Di Bronte would be remembered for his heroic, honourable deeds. he died minutes later from bleeding out the maximum capacity. This unfortunately started the War of the Spanish Succession. this man was later found to be the same man who nearly killed him all those years ago, O Senhor.

After the assassination of Bronte, a letter was sent to his family, signed by O Senhor:

I have wrote this to inform thee that I have done what must have been done. I have killed Fernando Di Bronte, now previous King of Napoli.

O Senhor, Master Assassin and will be ruler of Napoli.

When they received the letter, they were temporarily distraught. Concluding that they could not have an assassin as their King, they left Bronte's first son, Fernando behind. The rest then prepared to leave for Spain, were they would then live. On the way, they were ambushed by pirates, the leader of them James Kenway, the possible father of Edward. The pirates shot the daughter of Fernando, Maria, killing her. Angered, Fernando Jr's brother, Felipe, drew his rapier from its scabbard, then killing the allies of Kenway, James lying on the ground. Felipe then shot and spat at James, watched him die and left him there. The next morning, Felipe and his mother set off to Aragon aboard a frigate, arriving three weeks later. When they finally got to dock, they left the ship and rode on horseback until they reached the Palace there. That evening, they carried out a public funeral for Di Bronte, attended by about 5,000 people, then burying him on a hill overlooking the sea, to show his passion of sailing it. The grave read: 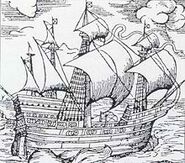 A possible drawing of the Mare Arce
Community content is available under CC-BY-SA unless otherwise noted.
Advertisement