Jack is widely feared under the title "Jack the Ripper", he was also a former member of the Assassin Brotherhood in the 19th Century.

Jack was born and raised in the Whitechapel borough of London, where he lived alongside his mother until she was murdered by the Blighters a gang created by the leader Crawford Starrick. Jack with no were else to go Jack was sent to an insane do his trauma until he was recused by Jacob Frye. Jacob introduced in into the Brotherhood and also took him to India to learn fear tactics from their Indian Brothers.

After returning to London over the years he befriended an younger initiate named Samuel Frye the son of his Mentor Jacob Frye. Jack taught him the fear tactics he has learn in India.

Years as an Assassin Jack developed an extremist view of the brotherhood. Eventually, Jack took control of the Rooks from Jacob though fear and intimation and killed anyone who try to deter him.

During the Autumn of Terror, Jack murdered a number of prostitutes who was sent as bait this people were "Mary Ann Nichols", "Annie Chapman", "Elizabeth Stride" and "Catherine Eddowes". With these murders, Jack, under the pseudonym of "Jack the Ripper", started to spread fear in the borough Whitechaple and all across London. He also managed to capture the his old mentor Jacob Frye. But before he captured he had requested that his sister Evie Frye come to London.

Jack angry at Miss Frye destroying his operations he staged a trap for Evie at Lambeth Asylum, with the intention of killing her. He lured Evie to the site of his mother's murder and left her with clues and cues indicating his true location of the asylum. In preparation for her arrival, he killed prominent Lambeth Asylum staff who knew of his childhood confinement there, he also destroyed all records regarding him.

While he held an advantage over Evie with his superior strength and help from the inmates, Evie was able to catch Jack off-guard, and wounded Jack with his own dagger. Jack passing out do to his injuries made Frederick Abberline and Evie think he was dead thus faking his death. Abberline tried to hid the body of Jack not knowing he was alive so he entrusted his lieutenants to burn once they got out of London but, before they left Jack woke up and killed a near by civilian, who was a reporter and put his mask over his head to fool Abberlines lieutenants.

The Great Gang wars of LondonEdit

Jack still recovering from his wounds did his best to keep the Rook's under his control but the Fryes managed to win back the Rook's in some boroughs of London. This made Jack angry so he ordered full out attacks on the Rook's operating in the Assassin controlled boroughs resulting in a Civil between Jack's Rook's and the Assassins Rook's. But with this gang civil war breaking out the Blighters make their return. Jack wanting the gang that killed his mother destroyed also sent Rook's to attack as well but little did Jack know this would be the downfall of his gang.

After the assassins reclaiming many of the Rook's from Jack and the Blighters also attacking many his gangs many operations. Jack knowing that his reign over London maybe coming to a end especially after his old friend Samuel Frye assassinated many of his lieutenants. Fearing his reign of Terror coming to a end Jack fled out of London going into hiding for a short while.

In 1892 Jack wanting revenge for his gang made a plan. He made sure that the assassin Samuel Frye got a led to an abandoned factory were a Templar meeting was taking place. Jack had killed all Templar and Blighters there in preparation for Samuels arrival. But Jack angry when the assassin Robert Norrington walking the factory. Jack throw a fear bomb at him to dull his sense's. Jack angrily stabbed him in the chest repeatedly for almost hundred times letting him blood out on the floor. Jack laughed and said "Looks like creed failed you as it did with me, Rest in peace Mister Norrington". Leaving the body on the floor as bait for Samuel to find but before he arrive Jack placed a bomb to blow the place up..

When Samuel walked in the factory, he jumped out of the shadows but before Jack said anything the bomb blow up putting the factory in flames. Jack surprised that the Bomb went off so early throw a fear bomb at Samuel but he used his rope launcher to climb up to the third floor Jack doing the same chased after Samuel. Jack fighting Samuel almost killing him but before he could the floor collapsed knocking both of them on the second floor. Jack then reached for his dagger. But before he grabbed the dagger his old friend impaled him with a fear spike. Jack tried to free himself but Samuel stabbed in the chest with his hidden blade. During his confession he said "THE CREED FAILED MY MOTHER, IT FAILED ME, THIS IS NOT THE END OF THE RIPPER". But Samuel said it is and ran out to leaving Jack to be burned alive in the flames ending Jack's reign of terror. 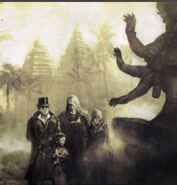 Retrieved from "https://acwfanon.fandom.com/wiki/Jack?oldid=8449"
Community content is available under CC-BY-SA unless otherwise noted.