"They may have broke my body, but they will never break my willpower"
―Louis-Robert's journal, 1779

Louis-Robert Théndoir de La Villedieu (1740–1781) was a French LGBT Assassin that operated in the Caribbean during the Purge of Assassins. He was the lover of the explorer William du Môtiers, and the owner of a brothel for gay and lesbian individuals. He was arrested in 1776 by Templar Eric Johnson for "inappropriate behavior in presence of other men and women, and for trafficking of poor souls". Having his lover murdered at the Old Avery – and the Assassin Brotherhood nearly extinct – Louis-Robert was transferred to the city of Kingston, Jamaica: here he was put in the Fort Charles – with no hope of escape.

Being born to the bankers Hervé and Évinore Théndoir de La Villedieu, Louis-Robert grew up in the company of other bankers and important men and women in France. When families had their children with them, Louis-Robert was the one who was set to entertain them. The young boy took this task very serious, since he had no other siblings himself.

Entering the years of puberty, Louis-Robert soon found the male teenagers that was supposed to entertain, attractive. He felt a need to be with them. He had a close relationship with another teen-boy, and at the age of 16 Louis-Robert lost his virginity to him. His parents found out, however. Therefore, he was sent to Switzerland – the parents was ashamed, but he was not. Now he knew that there were other that had same desires as himself: being with a man.

Despite the shame, his parents gave Louis-Robert money to live. He was their son, and they did not wanted him to die, either.

Living in the district of Môntiers, Louis-Robert earned a living by starting a little loan-sharking business. With the money from here, he could spend them on whores and dancers. He used them to make his fantasies come true. But he was never really satisfied.

One night, he was out in the town, drinking. When a man dressed in brown robes and a hat came towards him, Louis-Robert felt an instant connection between them. After some talk in the bar, Louis-Robert followed the man home to himself: the loan-sharking. Inside the building, the man presented himself as William. The two had an intense night of love, a night Louis-Robert soon forgot in all the wine that was drunk that night.

Awakening the next morning, Louis-Robert found himself on the table. He was partly dressed in clothes. But a set of other clothes was still there. A full set of clothing! That meant the man he had slept with, had gone from the building without any clothes. After this little fling, Louis-Robert tried to find the man again, but was not successful in this. So, he traveled to Caribbean, selling his business.

Arriving in Caribbean in 1764, Louis-Robert established himself in Nassau. He started from scratch, and soon he was brought to the attention of the Assassin Order. With his knowledge, Louis-Robert could indeed support them. He was recruited into the branch, pledging his allegiance to the Assassin Mentor Claude Dimanche. Establishing a little brothel, he also used his employees to get information about people that could work against the Assassin Order.

One day, Louis-Robert sat at the Old Avery, trying to get known with some future men and women that could visit the brothel. Whilst he drank a man sat down beside him. Louis-Robert noticed the clothing. He had seen this only on one man before in his life: on the man that had forgot his clothes – and must have walked home naked. If this was him …

Operating for the Caribbean Assassins from Nassau, Louis-Robert also administrated the brothel with great profit. The people he took in was outcasts, and they were accepted by him without doubting.

With the Templars' presence growing in the years from 1770–1776, Louis-Robert and the workers at the brothel needed to be more discreet. Even if the they did as good as they could, Louis-Robert and his employees was in need of money. This made the Templars capable of soon tracking them down. William had been killed in 1776, forcing Louis-Robert to stand by himself.

After joining forces with the Templars, one of his employees gave away the location for a bit of coins. The Templar, Eric Johnson, arrested everyone that lived at the brothel. The Templars' little puppet became a victim himself and was sent to Port Royal with the rest of the men and women that lived at the brothel. They were sent to Fort Charles, Kingston. Louis-Robert saw Nassau for the last time when they were all brought from the Old Fort to the beach, where they were transferred to the frigate that was going to bring them to the island of Jamaica.

Approaching the city of Kingston in Jamaica, Louis-Robert and his associates was brought to the local Templar. The Templar understood that Louis-Robert and some of the prostitutes worked for the Caribbean Assassins. The other ones was released with a warning from the Templar: "If anyone of you trying to free your master or your friends, your fate will be the same. Prison for a lifetime." With these words, Louis-Robert and six other Assassins was sent to Fort Charles.

Living in the prison Fort Charles, Louis-Robert and his associates got news now and then. By some Templar-guards, Louis-Robert became known with the fact that the men and women that served the Brotherhood was dead. The Templar Grand Master had won the purge, and now the Assassins' hideout on Great Inagua now belonged to the Templars.

Seeing his fellow-Assassins being executed and their bodies hang in gibbets one by one, Louis-Robert found himself in the cell one night with a razor. Everyone were gone. He had been locked away in Fort Charles since the end of the Purge, and now the year was 1781. Five long years had passed, and the end would never come. So Louis-Robert would come to the end instead.

Assassins that stood close to Louis-Robert

Templars that was close enemies of Louis-Robert 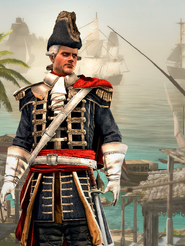 Eric Johnson
The Attorney
Add a photo to this gallery

Retrieved from "https://acwfanon.fandom.com/wiki/Louis-Robert_Th%C3%A9ndoir?oldid=11199"
Community content is available under CC-BY-SA unless otherwise noted.