Augustin Rouen: "Traitor! Traitor! How could you do this to your own brothers and sisters of the Templar Order?"
Marcus: "I am not a traitor! I just simply followed my brother's orders. My master will not be pleased with this: He had such high visions of this part of the world. His wife would also have kept this part of the world in beautiful shape, kept its green grass. Now its over: you and your friends will kill them, won't you? Now it over, its all over. "
―Marcus and Augustin Rouen upon the first's deathbed, 1778

Marcus Bonnett Rockmail was a British Templar that operated in Caribbean along with his big brother, Edward Rockmail, on behalf of his superior: Jean-Baptiste Orpheus and his wife – Jeanne de Orpheus. Marcus was tasked to find and locate ships that was loyal to the Assassins and their cause, and destroy them. Ships that belonged to the Fleet of Bullion was also to be destroyed. He also used a plantation to finance his operations.

Born in the outskirts of Dover, Rockmail was raised by his father to be a farmer. He did not wanted to do this however. Every time his brother and father went to the market in the city of Dover, Marcus got the chance to spot the blue sea – sitting on the horseback. He dreamed of it, fantasized about it: what it could do, where it could bring him.

In the city of Dover, Edward got friends – of which one of them was a high-ranked Templar-member. This friend inducted Edward into the Order at the age of 21 in 1763, and Marcus soon followed. As a new Templar, Rockmail was sent to locations as Scotland, Wales, Ireland, the Colonies, and Caribbean. Sometimes, the Order even sent him as long as to the Ottoman Empire – all this with his brother.

Being sent to Caribbean permanently in 1774, Rockmail and his brother – now also inducted into the Order – made their fortune by establishing a loan-sharking business, where they murdered any who did not pay their debts. If the Grand Master or her puppet or ally came, the brothers explained that their victims was persons that stood in the way of the Order's plan to shake the human kind to its rightful place.

With the Order growing after the Assassins fall, Edward and Marcus was soon contacted by Jean-Baptiste and Jeanne Orpheus: French Assassins. Rockmail had managed to pick up some French and managed to have conversation with them without using a translator. Orpheus told the brothers that Grand Master Madeleine de Bullion had used the Order to achieve personal goals, and this was against the Order's ideology and philosophy. Edward and Marcus agreed, and with the guidance of Orpheus, the two brothers terrorized the Caribbean sea – just as pirates.

When the Orpheus-conspiracy was discovered by Augustin Rouen, the Grand Master's second-in-command, Edward and his brother immediately used their money and influence to find and kill those who tried to stop their plans in taking down Madeleine de Bullion. This led to their downfall: they became careless. Marcus used his ship, HMS Thorne, to hunt on a little emission of ships from the Fleet of Bullion when he was attacked by Augustin Rouen.

The brig Mademoiselle Martinique used her cannons and mortars to destroy the mast. She destroyed the rear, making the ship lying dead in the water. Augustin gave the orders to board the ship, and Marcus was forced to arm the crew with the things they had. He fought off several of Augustin's men before he spotted the captain self. Marcus used his pistols to fire at Augustin but missed. The captain did now see him however and ran towards to him. Marcus fled into the cabin of the captain. Augustin followed him. Inside the cabin, Augustin used a knife to wound Marcus in the chest. Marcus had stood by a desk and searching for something. Now he grabbed a pistol and fired at Augustin, who needed to duck and more dance towards him. He delivered the deathblow by stabbing Marcus in the stomach, and then in the chest – close to his heart.

Leaving the body of Marcus Rockmail, Augustin discovered what the young Rockmail-brother had searched for: an Apple of Eden! It had to be taken by one of the ships Marcus had boarded. Now it would be in the right hands, and the Order would use it to turn every action in the Caribbean in their favor by using the Apple. HMS Thorne was sent to the bottom of the sea, and the Apple brought to Port-au-Prince – but it would later be sent to the governor of Cuba. 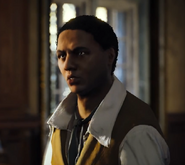 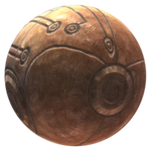