"This? This my boy is the Source of Eden. The most powerful Piece of Eden in existence, it is a rock from the stars that comes to us every 700 years or so. Inside this rock is raw, unstable energy that the Ones Who Came Before used to create their other Pieces of Eden."
―Kojiro no Umon, 1090

The Source of Eden #1 was one of several pieces carved from a meteorite that comes to Earth every 700 years that contains cosmic energy. The cosmic energy that comes from the Source was used by the Isu to create their Pieces of Eden. The Source is the most powerful Piece of Eden in existence and has the potential to change the tide of the Assassin-Templar War.

The Source was used by the Isu millennia ago. Shortly before the First Catastrophe, it was placed in a Temple in what would be known as Saika, Japan many years later.

In 1090, it was discovered by the Templar Grand Master of the Japanese Rite, Kojiro no Umon. Although he was killed by the Assassin Kurosawa no Rōnin that same day. It was later destroyed through unknown means by Rōnin. 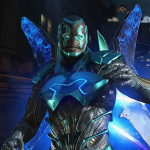