"This is not some mumbo-jumbo"
―The Bender

The Bender (harvested from: Jeanne de Orpheus, a Templar during the Purge) was an OTPA (Omega Training Program Avatar) used by Abstergo Medical in their research for Pieces of Eden, and to train recruits of the Templar Order, during their Project Omega and it's training program. The Bender's special weapon was her dagger.

The Bender was a voodoo-princess-turned-Templar that operated in the Caribbean sea during the late 18th century. She belonged to a tribe of witches that executed voodoo in the outskirts of the city of Saint Pierre, Martinique. She was recruited into the Templar fold on her background that she could control an Apple of Eden.

The moves executed by The Bender when controlled by the player.

Moves unique to The Bender

Approaching her target from the front, The Bender are using her dagger to kill her victim. When up to the target, The Bender are pulling out her dagger and stabs it into the victim's chest one time. She leaves it there, while she dancing around the target – putting a spell on their soul – and then pull out the dagger. The victim falling in front of her, and The Bender is then parting her target's skull with the dagger.

Running up to her target, The Bender is kicking it to the ground. Then she lifting her dagger and throws herself on the target's chest. The Bender's victim are forced to see while it's killer are lifting her weapon to deliver the deathblow. The dagger are destroying the skull, and the soul are being sent to be judged by the higher powers. The Bender are placing her dagger back in the belt and flees the body.

Arriving her target in an incredible speed, The Bender are jumping on her target. The back is clean, but are being painted red by The Bender. The dagger are being raised anew, and The Bender sink it back several times. Every wound will free the soul.

Moves executed by The Puppet when using another weapon than her personal. These moves are 'common' because they are executed by the all avatars.

Facing her target, The Bender pulls out her tomahawk and butts its head into it's stomach, winding them, which makes the victim bend over. After this, she swings the weapon down at his victim's exposed back, severing their spine and subsequently killing them. Following this, she then removes her tomahawk as she watches them collapse backwards.

Behind her target, The Bender takes out her tomahawk and embeds it into the right of the victim's hip, making it recoil in agony, before she removes her weapon and strikes down hard in between it's shoulder blades. Driving her victim to their knees, The Bender lets the target collapse as she sheathes her weapon.

Facing her target, The Bender takes ahold of her tomahawk and swiftly slices it across the victim's neck, causing him/her to spin around. The Bender then quickly follows up on this attack by embedding her weapon into her wounded victim's side and roughly pulls it free again, yanking him/her to the ground where they die of blood loss.

Behind her target, The Bender grabs her tomahawk and acrobatically jumps upwards, before brutally embedding her weapon in her victim's back. Using the force of the blow, she pushes them down to the ground and then roughly pulls her tomahawk free, before storing it at his waist.

Walking up to her victim, The Bender are using the pistol's end to hit her target in the head. The victim are lifting his/her hands to the head – trying to cover the wound. When the victim sees on The Bender again, she is pointing her pistol on her target and shoots.

The target of The Bender are walking down the street. When The Bender is shooting him/her in the knees, the victim are forced to bow down. Then another shot, through the victim's skull, is sending the target to the eternity.

Facing her target, The Bender gives him/her a harsh shove and then levels one of her pistols at their face, giving them no time to defend themselves. Ostentatiously spinning the weapon in her other hand, she fires, causing her victim to fly off its feet and unceremoniously hit the ground, dead.

Approaching her target from behind, The Bender roughly grabs ahold of her target and spins him/her around to face her. Having already drawn her pistols, The Bender fires a single shot into her victim's stomach, who doubles over in pain and sinks to his/her knees. Sending a final bullet into the back of the victim's head, The Bender holsters her weapons as her target's lifeless body slumps to the ground.

Approaching her target, The Bender quickly pulls out her spear and stabs it into his/her abdomen. She then cruelly pulls the spear upwards, further opening the newly inflicted wound and causing more blood loss. From there, The Bender removes her weapon, before she watches as her victim falls to the ground.

Casually walking up to her target from behind, The Bender pulls out her spear, before slashing the victim diagonally across the spine to the left, followed up by a second slash to the right. She then brutally forces the spearhead through the target's back, withdrawing her spear as her victim collapses to their knees, dying slowly.

Running up to her target, The Bender stabs her spear deeply into the victim's chest. As the victim grab ahold of the spear, The Bender takes her hands away from her weapon and spins around, before returning once more to his spear. From there, The Bender sadistically rips out her weapon by pulling on it single-handedly, before performing a second spin and using the momentum to slash her victim across the chest, causing them to fall back to their death.

Rushing over to her target from behind, The Bender impales her spear into their spine. As they recoil from the pain, she withdraws her spear and springs upwards into the air, subsequently slashing her victim down their spine from their neck, causing them to die of blood loss. 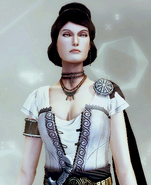