The Englishman (harvested from: Sir Frederick Downcastle) was an Animi Avatar used by Abstergo Entertainment for their video game Assassin's Creed: Changes. His specialty weapon was his sword.

The Englishman was an English commander of the British army who was a veteran of the American Revolution. After the war, the Englishman traveled to France as a spy for England to make sure things didn't go to out of hand. Whilst in France, the Englishman joined the Templars after meeting Germain and agreed with their morals and beliefs, and became a loyal member of their cause.

These are the moves performed by the Englishman when being controlled by the player.

The Englishman walks up to his victim and slashes them across the back twice. The Englishman then drives his sword into the victim's spine, killing them.

The Englishman runs up to his victim and punches them in the face twice before slicing them in the neck, killing them. 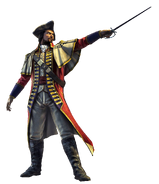 Add a photo to this gallery
Retrieved from "https://acwfanon.fandom.com/wiki/The_Englishman_(Multiplayer_Character)?oldid=10975"
Community content is available under CC-BY-SA unless otherwise noted.