The Turk was a trading company which served under the guidance of the slave-turned-Templar Shamar al-Djin. It was used by the Templars and their acolytes for transport of slaves, wine and other goods. The Turk was in control of the trading-business in the city of Calais.

The Turk did not managed to live only established on good deeds and trading however. The director, Shamar al-Djin, chose to work with two fellow Templars: the couple Marguerite and Joséph Iscariotte – who controlled the poor and richer part of Calais. Marguerite owned a fightclub, from where she got an income, which she used to hire brutes to own the streets in the city of Calais. Her husband, Joséph, was a wealthy man who controlled the lives of simple souls, and of the man and women who was "descended from God". Joséph ruled the city with an iron fist. Many families – rich and poor – ended up at the street if Joséph knocked at the door.

The Turk had representatives from all of Europe: some from Norway, some from Italia – and someone did even come from Siberia. Shamar al-Djin had established The Turk at the guidance of Robert LaGouze's tutor. Calais was in great need of trading, and someone like al-Djin, would be really extraordinary. As long as he did not become a competitor for the LaGouzes' trading company, they would leave him be.

As a Templar however, al-Djin did not kept his promise, and with the help of Joséph Iscariotte, the home of the LaGouzes were sold. Their house in Marseille had been burned down by the Order – this too under the guidance of al-Djin. To be sure, al-Djin sent Marguerite Murat to deal with the family before they knew it was him who was the architect of their misery. One by one, the LaGouzes was killed by Marguerite, and The Turk got all the money and resources the LaGouzes had in their inhabitance. This made The Turk's finances grow sky-high.

The director, Shamar al-Djin, become a wealthy merchant with the money he stole from the LaGouzes. Al-Djin established a plantation in the Caribbean (in a French colony) where he had hired a local businessman to administer the tract of land (in the name of The Turk). France had established Code Noir that forbid cruel treatment of slaves, but even an earlier slave as al-Djin ignored this Code. He thought if he could become a free man after some years of discipline, other slaves would too.

When the death of al-Djin and his company reached the ears of the Templars in Paris, Germain hurried to Calais and collected all of the fortune before it was wasted – given in the hands of the people. Germain collected them and shared them with his Templar-acolytes. 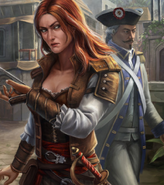 Luzia Neves
Add a photo to this gallery
Retrieved from "https://acwfanon.fandom.com/wiki/The_Turk?oldid=10988"
Community content is available under CC-BY-SA unless otherwise noted.