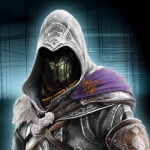 Hello there, I am known on this wiki as Slate, although my real name is Thomas. I also go under the pseudonym Serrachio on the Ubisoft Forums and Saracchio on the Xbox 360 and PSN, though I only add people to my friends list if I know who they are.

I have studied Games Development at college (I was too idealistic but didn't put the effort in. :S), and since my HD PVR arrived, I have made a couple of videos on Youtube of my multiplayer gameplay, though I'm pretty average, to be fair. I also happen to be a member of the Reckoners Clan.

Alongside my position of founding member and Administrator amongst this wiki, I also hold a Staff position at the official Assassin's Creed Wiki.

Retrieved from "https://acwfanon.fandom.com/wiki/User:Slate_Vesper?oldid=4330"
Community content is available under CC-BY-SA unless otherwise noted.