"We work in the dark, to serve the light. We are Assassins."
―Niccolò Machiavelli

In 1503, Ezio Auditore da Firenze sent a group of Assassins to Constantinople, where they managed to retrieve maps of the New World from a cartographer's workshop. Realizing that the Templars were already expanding their influence to the new-found lands, the Assassins swiftly followed suit. After these Assassin immigrants from Europe made contact with the indigenous peoples in the Caribbean, many natives joined the Order, finding similarities between their own way of living and the Assassin ideology. From 1503 onwards the Assassins in the Caribbean were led by Dilham Tazim, the younger brother of Yusuf Tazim.

During the Golden Age of Piracy, the Assassin Order was lead by Mentor Ah Tabai and his right-hand woman: Mary Read. They had hunted the Templar Order for years, but the luck was turned when Edward Kenway was interrupting their actions – and the Templars was now leading. Later, Kenway – along with Andrés François – started to hunt down the Templars. In their search of the Sage, Bartholomew Roberts, Kenway and the Assassins started a hunt for the Observatory. It ended with the Templars being eliminated, and the room being protected by the Guardians of the Observatory.

At some point after the Purge of the Assassins, the Templar-turncoat named Erick Rackham chose to reestablish the Brotherhood. He established himseld at the island of Ocracoke. After bringing down several Templars – such as the Master Templar of Great Inagua, Shalin Yangming, Franscesco Malfetti, Eric Johnson and Augustin Rouen – with the help of his lieutenants, the Order's presence and influence was massively reduced in the West Indies.

With the breakout of the War of 1812, the Caribbean Mentor sent troops to support the American Brotherhood and their Mentor: Connor. In 1816, the Brits Hunter Porter and the Frye-brothers arrived in Caribbean to aid the reestablished Brotherhood in purging the West Indies anew, this time hunting for the Templar Order.

Today, the Assassins are trying to make the Brotherhood grow. During the Great Purge, the Brotherhood was nearly demolished. The only one still standing, was apprentices, a few Master Assassins and the Mentor: Dipper Franz. From a bunker in Kingston, the Assassins are hacking into governments of the West Indies. Abstergo Medical are running a project which allows the Abstergo-branches to create their own Pieces of Eden.

Assassins during the Golden Age[] 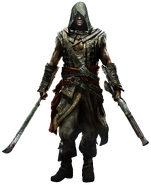 Assassins during the Purge []

Assassins that acted on behalf of the Assassin Order during the Caribbean Purge.

The Assassin Council was based with the Mentor and his or hers lieutenants at their side. Today, the Assassins are so few, only Dipper Franz and some other Assassins is guarding the Caribbean

The recorded Mentors of the Caribbean.